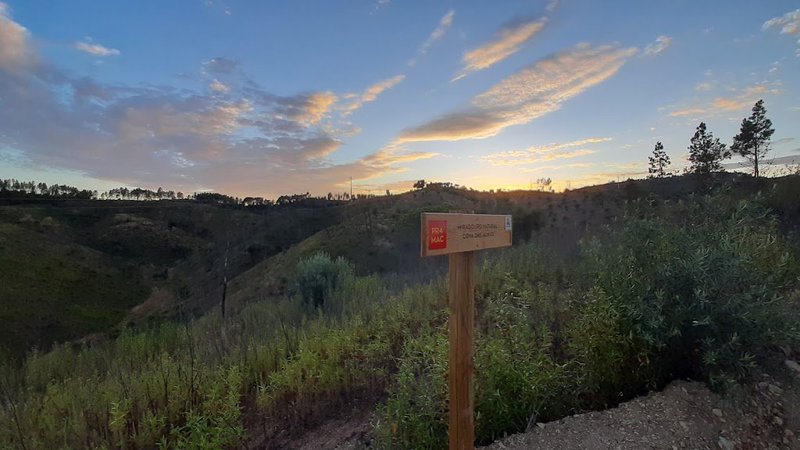 1 - MOORISH HOLE OF THE GRAVE OF SOULS

Overlooking the narrow and serpentine Ribeiro dos Lavadouros, on the slope of the so-called COVA DAS ALMAS, there was, the legend said, a cave under an enormous stone, which showed the way to the interior of the hill, where once lived an Enchanted Moorish, a descendant of the Moorish peoples who lived here.

Fleeing from the attacks of the Christian Forces in its passage to the south, the so-called Moorish here found a place to live.

Legend has it that one day, while grazing her cattle by the stream, a small shepherd girl saw the Moorish woman, by a large clothesline, combing her shiny holly-coloured hair, with a comb that sparkled in the sun.

It was golden - thought the little shepherdess.

When Moura saw the little shepherdess, she called her.

- What do you like best? My golden comb, my clothesline or my hair?

Surprised by such an intriguing question, the little shepherdess said it was the Golden Comb.

- You were unhappy in what you said. You molested me with your truth. If you had said it was my hair, I would have given you my comb and you and your family would have come out of the poverty in which they live. Thus, your souls will walk forever in these graves among mountains.

Having said that, it disappeared and souls still travelled through those mountains today, in search of the Moorish, hence the name COVA DAS ALMAS.

Approximately 1,000 metres downstream of the mouth of the Ribeira de Eiras, there was once a source of water with a ferrous taste.

This fountain was submerged by the Albufeira da Barragem.

There was a legend about this fountain, which curiously was similar to another existing in the fountain of ORTIGIA, in Syracuse, Sicily.

A beautiful Moorish woman lived in this land, which was only seen by nymphs.

One day while contemplating the stream, a Christian prince riding down the mountain saw the Moorish and was amazed.

Ecstatic at the discovery and full of greed, he tried to kidnap her.

Galanta, her name was Moura, and she cried out for Alah and the Nymphs who danced with her on the sand of the stream.

God her God did not hear and the nymphs did not wake.

Tired of fleeing, she disappeared forever at the feet of the prince, and in her place appeared a fountain, in which the sprouting of the water resembled the solutions of the Moorish that live there

3 - THE TREASURE OF CHÃ DA MOURA

It was said that in this place there was a large pot or boiler, which holds great wealth in gold and silver.

It was a place where the Cattle passed many times and so its wing was broken.

Legend has it that that treasure can only be found when two twin men plough the land where it is. The plough must be made of all wood and in one piece.

A joint of twin oxen will pull it.

Once existing, it was a hill that was artificially built with the earth from an ancient Roman mine in the region.

It was destroyed by electrification of the Railway Line of Beira Baixa. It was located on the land south of the industrial zone of Ortiga.

Legend has it that there was a secret barn of some Burgo Mourisco. In ancient times, someone saw ants carrying corn berries, coming from its interior.

Another legend points out that inside it there were two enormous pots. One with gold and the other with poison.

5 - An Episode of French Invasions

General Junot's troops had crossed the Portuguese border at Beira Baixa and, as far as the general state of fatigue of the soldiers and the deficient communication routes allowed, they demanded, Vale do Tejo below, the Capital of the Kingdom.

One afternoon, at the end of October 1807, the first patrols, visibly maimed imposing their "warlike force" with a dirty, sometimes ragged uniform and a rifle of unused stretch marks, appeared at the top of Taipa, in Ortiga, on the road leading to the parish of Belver.

On that occasion the old bleeding surgeon, João de Matos Coelho (that those villages had moved to do their clinic) returned from the Towers. He had not been molested by the invading soldadesca, which he had sensed, because he was riding the crossroads...through Olheiro da Galante, Vale das Estacas, towards Monte Novo. As soon as he got there, he knew that Red Ambrose (1 and 2) had been wounded in one arm and that he was calling for his help. It was then that the wounded man's account informed him that he had been shot by the French on the way, in order to prevent, against bad encounters, several people from Monte Novo returning from the village (3), where they had gone to make a christening, Since Napoleon's troops were already in Ortiga and were preparing to march up the moor... He carried a paper in his hand, and a bottle, pretending to go to the booth to fill a recipe... But even that wouldn't do him any good because he had been shot in the Ponton...

(*) Told to the author (Joaquim Rosendo) by his Mother, Teodora Pires Rosendo

(1) He was the author's great-great-grandfather.

(2) He was the great-grandfather of the illustrious pharmacists Mouratos Vermelhos, from Lisbon.

(3) These people had gone to Mação to baptize a boy, Daniel Parente, of whom Daniel de Mação was godfather and godmother to Ana Parentinha, of Ortiga, at the time a beauty disputed by the main "morgados" of the land.

(4) He was the great grandfather of Mr. Manuel Perdiz, of Fonte Velha

Transcription respecting the original text, published in the single issue of the magazine "Freguesia de Ortiga" in September 1948.