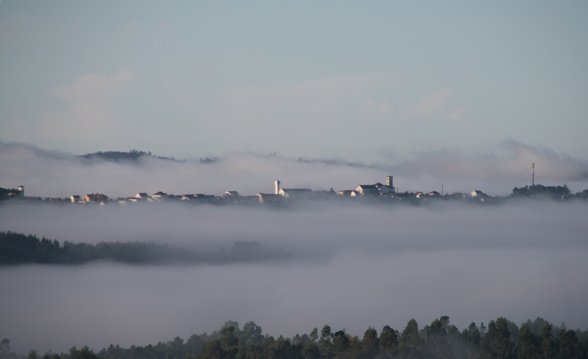 Cardigos is a Portuguese parish in the municipality of Mação, in the province of Beira Baixa, Central Region (Região das Beiras) and sub-region of the Middle Tagus, with 71.34 km² of area and 1 086 inhabitants (2011). Its population density is 15.2 inhabitants/km².

It was a village and county seat until the beginning of the 19th century. It was constituted by only one parish and had, in 1801, 1 121 inhabitants. When it was extinct, it was integrated in the municipality of Vila de Rei, becoming in 1878 that of Mação.

In 1525 it was called Cardigos or Bichieira, indifferently. There was a family named Cardigos from whom the town inherited its name. In official documents several names given to Cardigos appear, such as Brucheira, Bichieira, Buchieira, Abucheria, Vichieyra, and finally, Cardigos appears already in the charter issued by King John IV on February 5, 1643.

The foundation of Cardigos is shrouded in the distant past, but judging by the megalithic remains (dolmens) it is thought that there was occupation in this region many centuries before Christ.

Located, as the locality of Amêndoa, in a point of connection of several communication networks of Hispania, are found several Roman testimonies as some bridges, temples, aqueducts, etc.. Other vestiges were also located such as funeral inscriptions and a whole estate from Roman times where several agricultural implements stand out.

Following the Roman tradition many names of localities are derived from plants, animals and minerals (Moreira, Ferreira). It was this civilization that developed here the agriculture and cultures like the olive tree and the vine, to which are added fruit trees, cereals, and mineral exploration like gold, iron and tin.

f the immigrant people of northern Europe, the Visigoths, few were left, being certain that in 711 this region was occupied by the Muslims who settled here with their culture until the beginning of the Christian reconquest, carried out by Afonso Henriques with the help of the religious military orders, such as the Hospitalaries and Templars, until the end of the 13th century. Like the parish of Amêndoa, the first of the Cardigos was given to the Knights Templar, later passing to the Malta Order. This is why the coat of arms of the parish bears the cross of this ancient religious and military order in chief[2].

During the reign of Philip II of Spain, in 1605, Cardigos is elevated to the seat of the region.