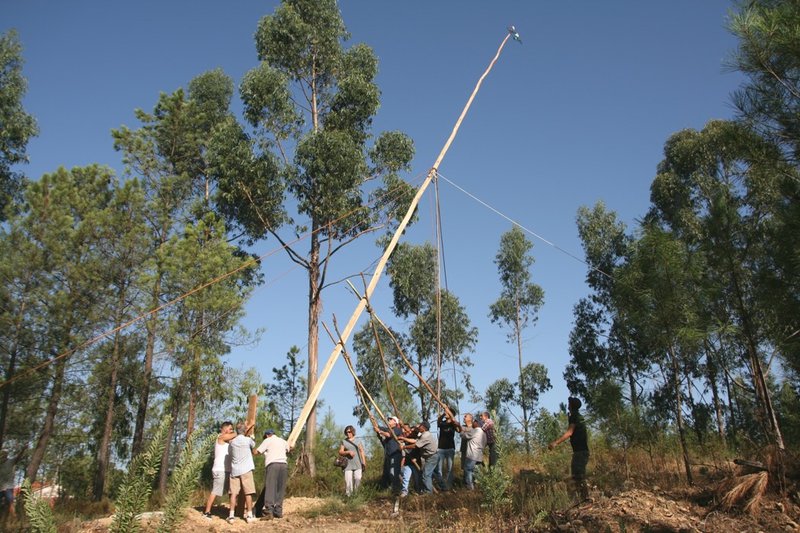 TRADITION OF THE MAST IN THE PARISH OF CARDIGOS

In August 2016, the people of RODA (Cardigos) decided to recover an old tradition that was common in many villages in the parish of Cardigos: the lifting of the mast.

The popular memory says that the tradition is very old and began at a time when a plague plagued the entire parish except the villages of Roda and Casalinho by virtue of the promise that the people made to the Holy Trinity of every year celebrate a mass if the said people were free of that disease. There are those who argue that the plague would be the pneumonic of 1918. So it happened and the tradition began. However, the piece in plate that represents the rooster has engraved the date of 1879, so it is supposed that the tradition of raising the mast will be earlier. Since then, the mast has been raised in some years and, every year, the population has not forgotten to have the said mass celebrated in the chapel of the Divine Holy Spirit, in Cardigos, the Monday after the feast.

In the ritual of the lifting of the mast, the first stage is the prayer in praise of St. Anthony so that no one is hurt in the lifting of the mast, after which the said is lifted. A Our Father and a Hail Mary are prayed to St. Sebastian, asking him to keep away from the "plague, famine and war. The ceremony was concluded, and the tradition was to eat lupins and drink a "little glass"...

In fact, what has already been lost in the memory of the peoples is that the tradition goes back a long way before the 19th century and comes since the Middle Ages, as does the litany: "From famine, pestilence and war, deliver us Lord! It was also at that time that the "Hail Holy Queen" appeared).

In other regions and we suppose that here too, although people are not aware of it, the raising of the mast was still related to the male manhood that was requested with the "raising of the stick" and the cock, at the top, has that meaning. Just as the rooster is a unique male in capoeira and "assists" all females, so similar sexual vigour was called for the men of the village in order to perpetuate the community.

An ancient tradition that remains in the collective memory of the people of the parish of Cardigos, with special incidence in Roda, Lameirancha and Casais de São Bento.