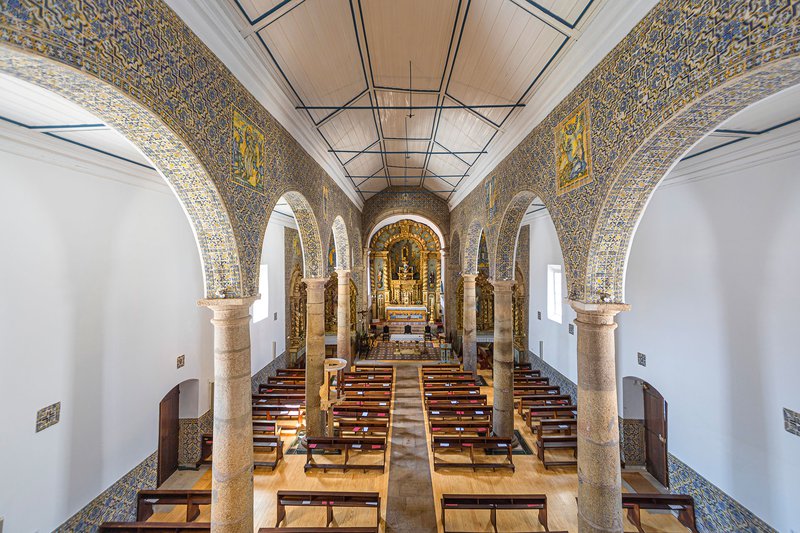 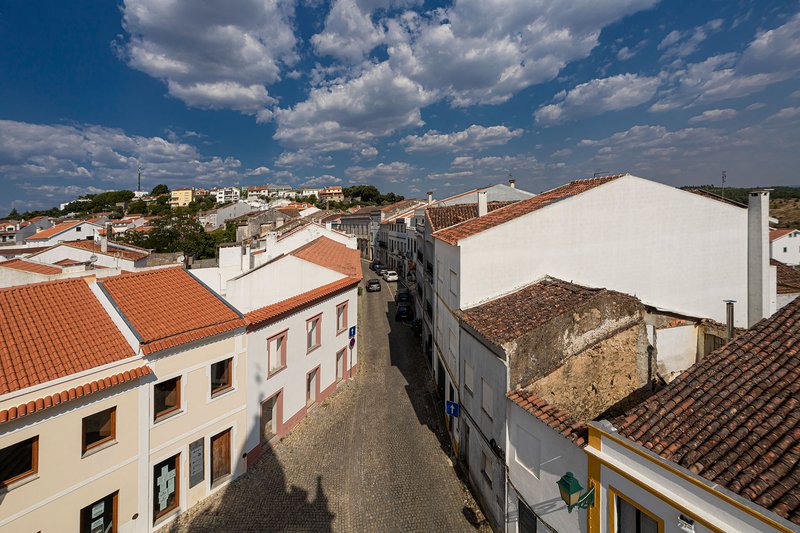 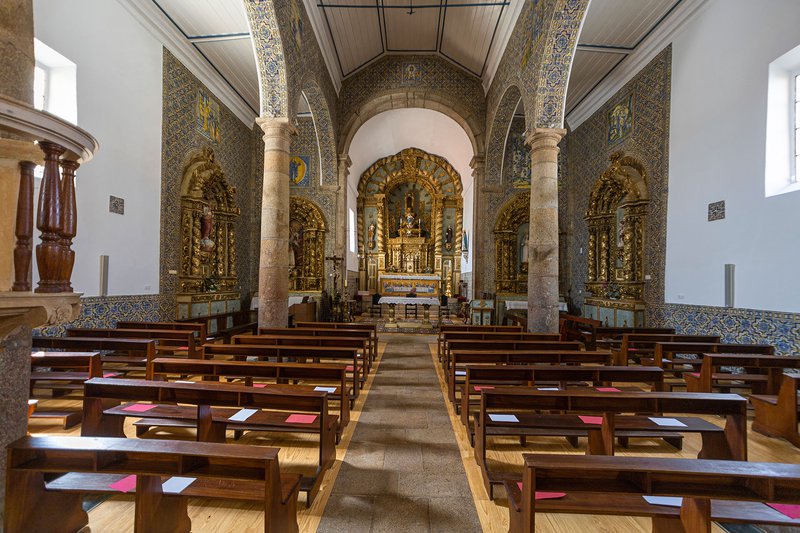 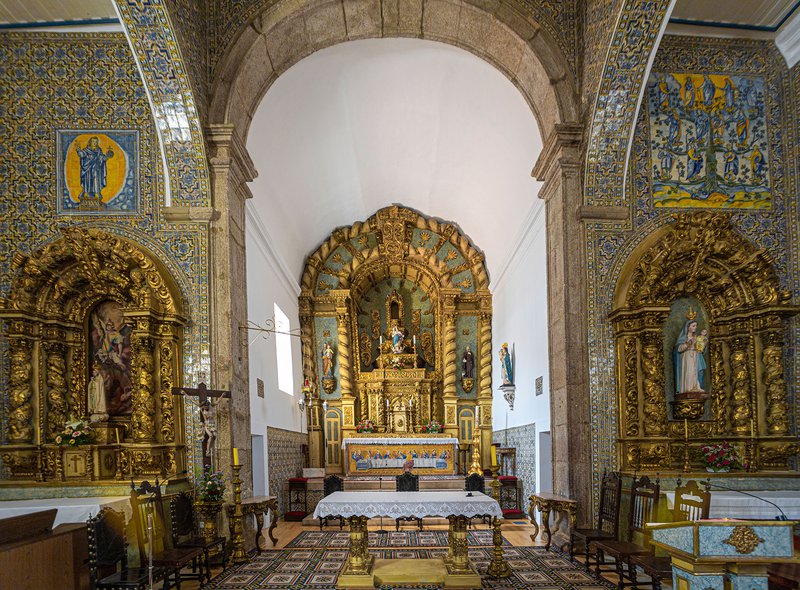 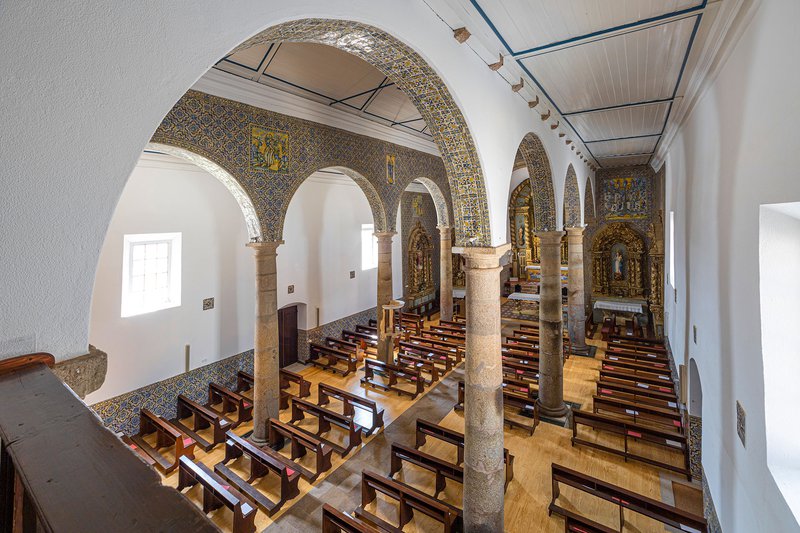 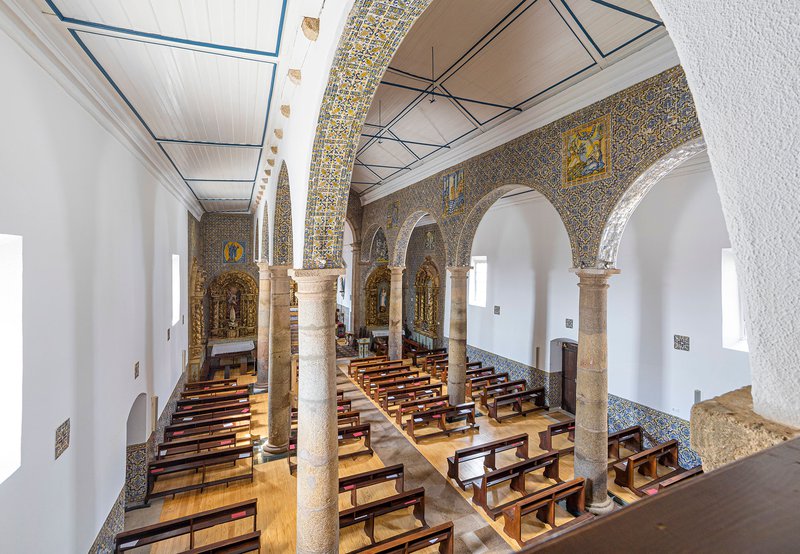 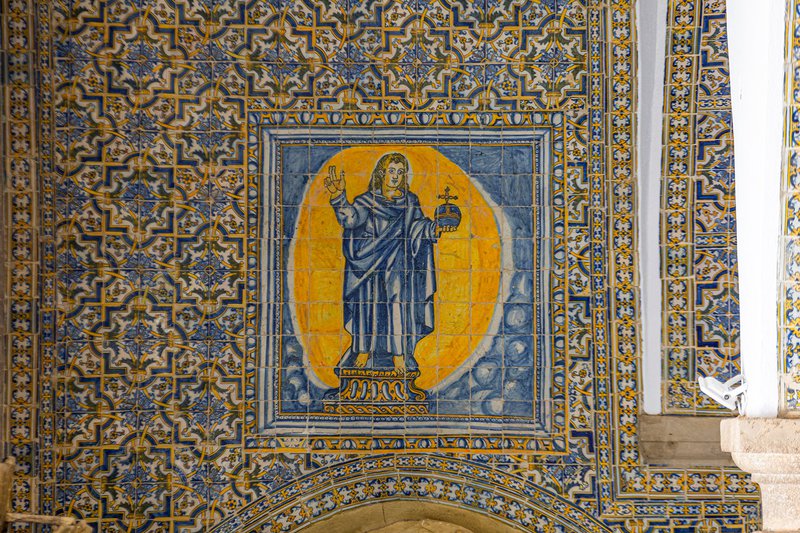 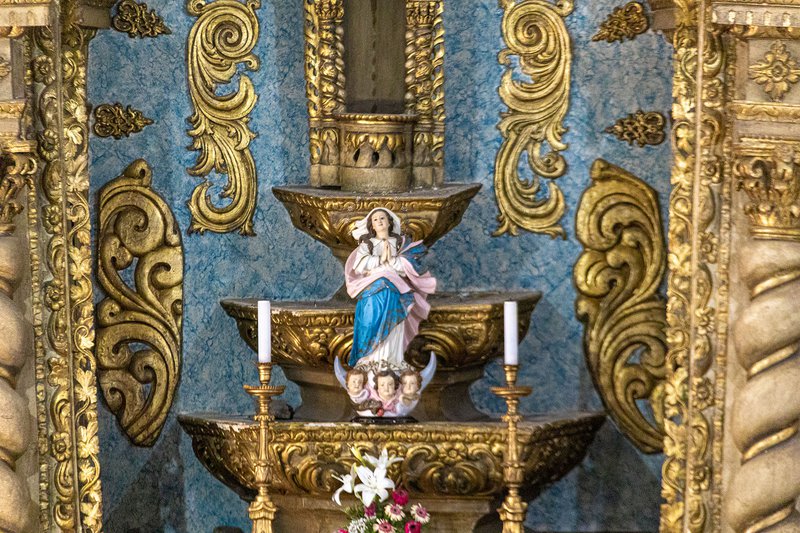 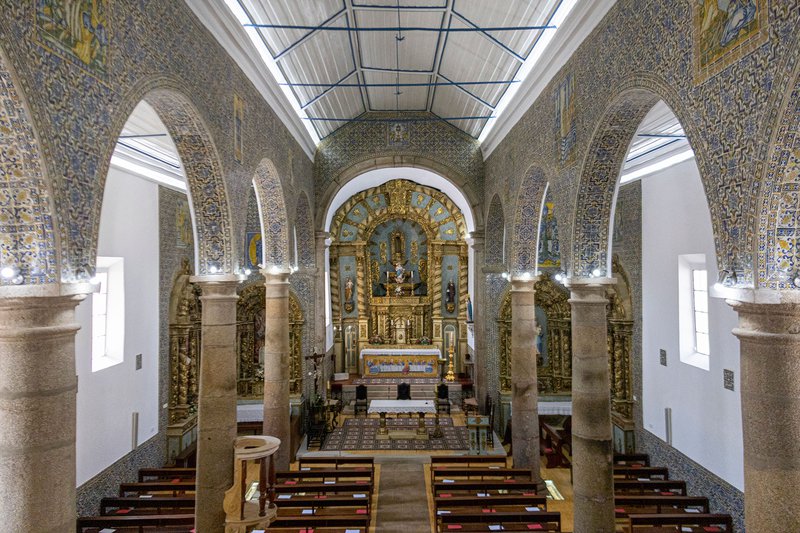 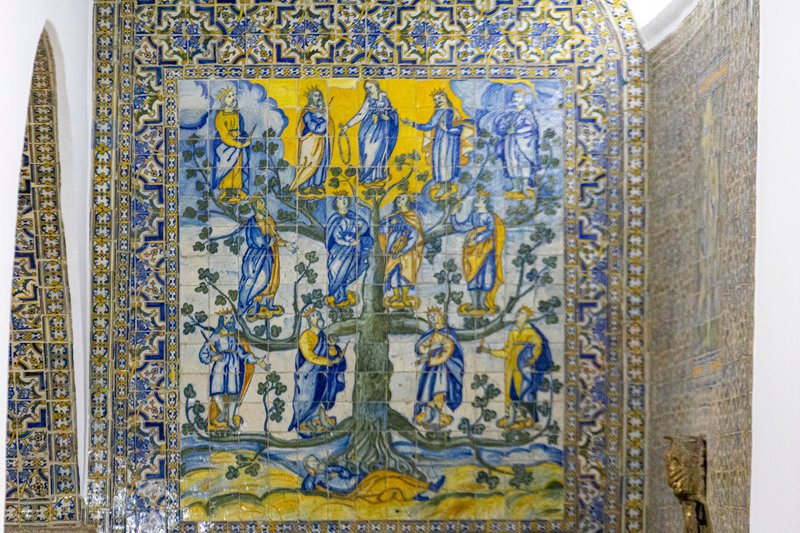 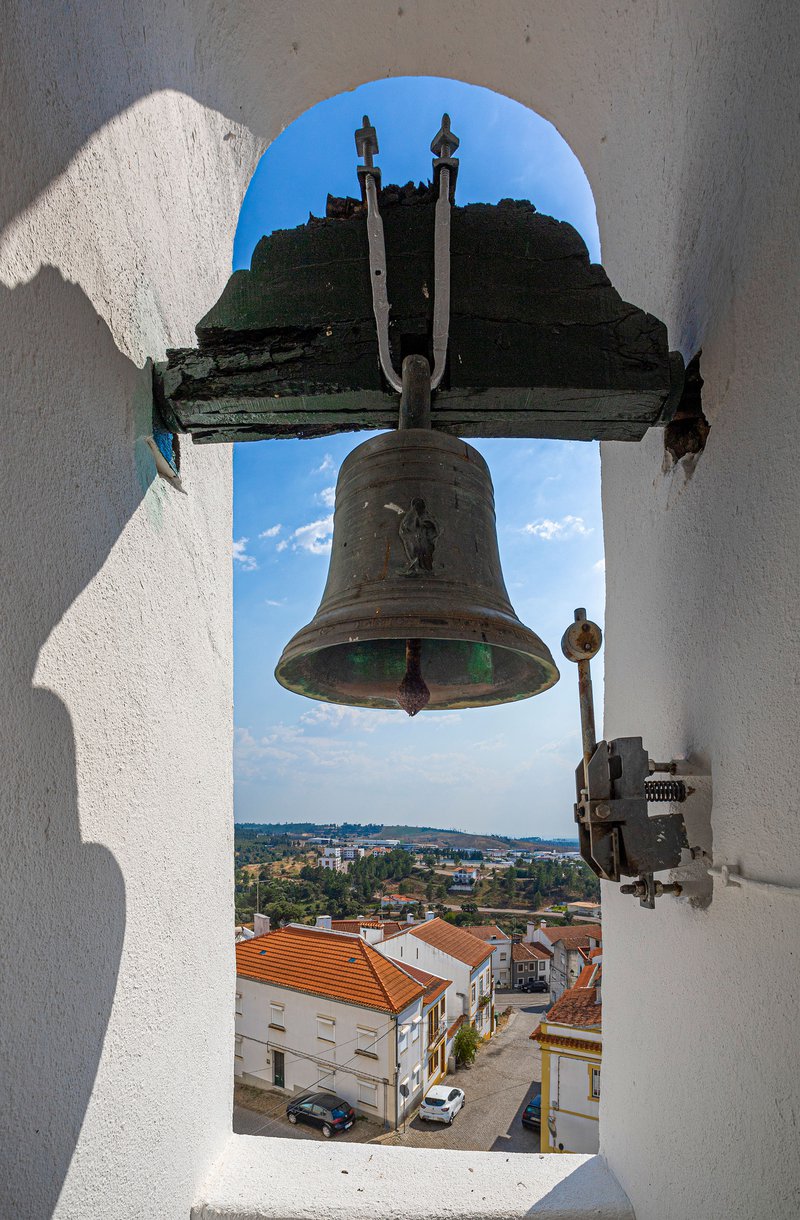 Orago: Our Lady of the Conception

Late Gothic and mannerist parish church, large, with three naves covered by a wooden ceiling, vaulted main chapel; angular gable façade, with bell tower protruding. Signs of the final Gothic in the bell tower culmination, with its pentagonal merlon crown and prismatic corpus. Late Renaissance portal; Mannerist spatiality, while maintaining the characteristic structure of Gothic architecture. The bell tower, with its merlon crown with a pentagonal finish, may have functioned as a watchtower, alongside the neighbouring tower of the old Town Hall, in the old Largo da Praça.

Longitudinal plan composed by the body of the nave to which the main chapel flanked by sacristies is attached, the bell tower on the opposite side. Volumes staggered with differentiated roof coverings with eaves, with cross on the gable, pyramidal corus topping the bell tower, topped by merlons of pentagonal profile and pinnacles on acroteries. The main façade faces the SE, with a triangular gable, partially covered by the protruding volume of the bell tower, on its left side, with a prismatic counterforce on the opposite side; on the central axis the portico is ripped, finished by a curved pediment, flanked by fins, and a small window below the gable; the bell tower is ripped by 4 bell windows, with a round arch. Side facades, with surrounding coping, symmetrically ripped by 1 moulded rectangular span door and 2 windows of straight wicker and deep wing. At the head end, the uneven volumes of the sacristies, 2 floors on the right side, 1 floor on the opposite side. Inside, 3 naves with 5 sections, divided by arches with a perfect turn on high Tuscan columns; high chorus occupying the first section; triumphal arch with a perfect turn on Tuscan pilasters; wooden ceilings with 3 planes. Main chapel covered with cradle vault. Gilded woodcarvings and marbled bottom, in national style, in the main chapel, side and side altars in the nave. Tiles in pattern, polychrome, sixteenth century, cover the walls in the area of the side and side altars and the interior of the central nave, framing small devotional pictures with themes of the life of Christ and the Virgin; on the side altar of the Epistle a representation of the theme of the Tree of Jesse; at the top of the side elevation of the nave on the same side, on the side altar, a panel with the representation of S. John the Baptist, dated 1644; small tiled panels with the representation of crosses, made of cutouts from the tiles of the nave, cover the bare walls of the nave. Front of the main altar representing the last supper of Ghirlandaio, adapted by Battistini, dated 1931. Chalice shaped pulpit on column, without access ladder. Windbreak in wood and chorus with balustrade also in wood *1.

1320, 23 May - Pope John XXII's bulletin granting to D. Dinis, for three years, for war subsidy against the Moors, the tenth of all ecclesiastical incomes of the kingdom, the church being taxed with that of Almond at 350 pounds; it belongs to the Order of Santiago and integrates the term of Abrantes and the bishopric of Guarda: 1574 - the church belongs to the royal patronage and integrates the Diocese of Guarda, attached to Santa Maria do Castelo de Abrantes; 1585, April 5th - royal authorisation to launch a finta for the reconstruction of the church; contract for the execution of the main church, a work awarded for 650$000; 1597 - conclusion of the works, according to the date engraved on the tympanum of the portal, certainly using structures from a previous building - the bell tower, crowned by chamfered merlons, is certainly a survival of previous construction; 1600, 10 August - Philip II pardons the architect (Pedro Sanches) for being "old and poor" the jail sentence to which he had been condemned for not having finished the Church of the Conception of Mação, with the obligation of finishing it; 1644 - tile covering, according to the date inscribed on one of the tile panels; 1825 - several reconstruction works, following a fire.