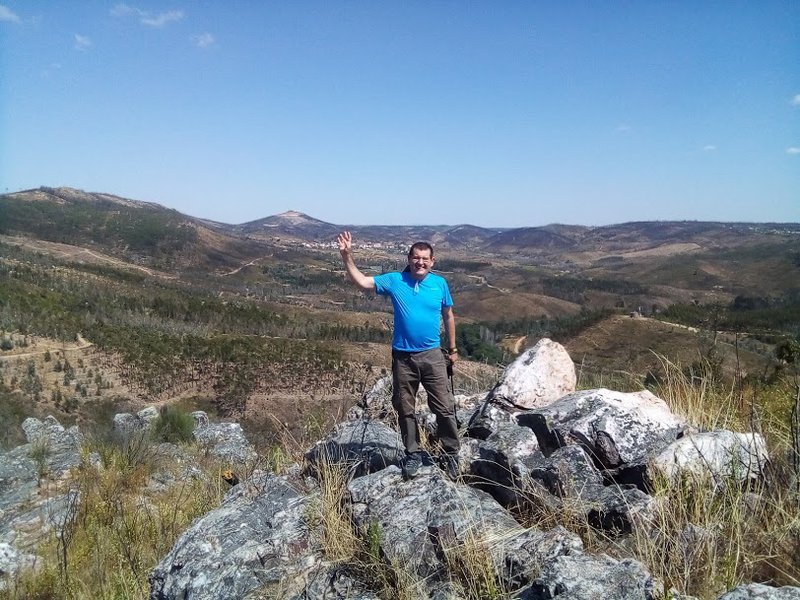 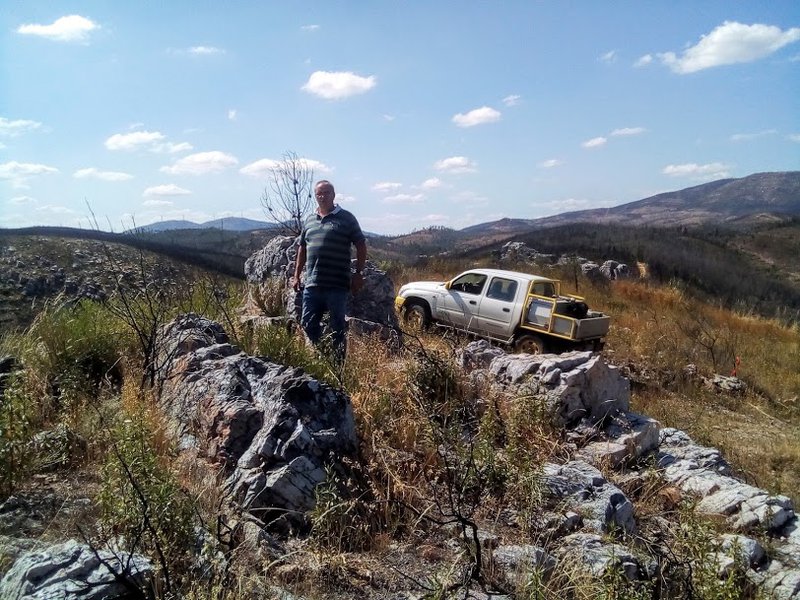 Between Bandos and Rebandos, and the two caratões both, and the street of Amieira, and the penedo Aivado, there is oiro arraiado, which reaches the plow iron. This is an old popular saying of the village of Caratão.

Nowadays the landscape is still black, although more than a year has passed since the last big fire in Mação. The green is late in reaching certain places.

I am at the top of Castelo Velho from there I observe the strait, and the whole Alfeijoeira mountain with all its quartzite crest. I try to imagine what it would be like when in the landscape there was still an old forest. It is difficult, however I imagine that it would be comforting and would somehow soften the harsh wind.

Places full of history and stories...

We go back to the Late Bronze Age about 3000 years B.C. when an ancient people erected a castro on the top of this mountain range. A high place of difficult access where they could observe everything around it.

Taking advantage of the existing cliffs they adapted the walls to what they found in the landscape and built a very rudimentary castle in order to take refuge and defend themselves in case of any threat.

With walls over 1.5 metres thick, made of dry stone they created a historic landmark. In times gone by, they may have communicated with other neighbouring high places through fire. The Castro da Zimbreira and the top of the Bando dos Santos.

Nowadays little is noticed, everything was destroyed with time, today we can only imagine what the life of those people would be like in distant times.

Taking a few turns below the summit there are fantastic places, one of them is undoubtedly a whim of nature, which unwittingly made a perfect ladder to climb the castle.

There are other reasons, several concavities that if it rained would be very useful to me.

Despite being so old the castle was identified by the enthusiastic judge of Mação, Dr. João Calado Rodrigues, and dated then the year 1946.

Through excavations later made and through artifacts found, we know that within that settlement existed since warriors, artisans and farmers. These excavations were executed later in 1983/84, directed at the time by the former director of the then Municipal Museum Dr. João Calado Rodrigues, Dr. Maria Amélia Pereira Bubner, today Museum of Prehistoric and Sacred Art in the Tagus Valley.

The fierce Lusitanian people, children of a Castro culture, treated these mountains as if they were their horse, a people of the mountains. In Maria Amélia's book (Monumentos historicas de Mação) she says that Trogo Pompeu, a Galo-Romanised historian of the 1st century BC, describes this people with these words: "They have prepared their bodies for abstinence and fatigue and the spirit for death".

I imagine that they would develop their agricultural activities at the bottom of the valley where there is good alluvial land.

Near the castle there would be a village, non-existent nowadays, the houses would be quadrangular or rectangular, a village that is unknown in the right place.

At the top I notice that there is an area that has been stirred, a few months ago I had found, but I left a large stone of granite, and other pieces of rock that are only there because they were brought 3000 years ago. For example, granite will exist in the area of S. José das Matas, Vale da Abelha and Ortiga, and Casal da Barba Pouco and Monte Penedo, far away for a time when there were no cars or roads? I also saw pebbles from the river there, among others. In other words, the traces still exist.

When I walk through these places I always hope to find something new, but until today nothing has jumped in my sight. Just suppositions that I keep with me.

Sitting at the top of this mountain, I observe the landscape, in the sky swallows fly, and a round-winged eagle crosses the valley below.

I observe the windmill of Fadagosa Alongo over the horizon... the trees and all the biodiversity that accompany them are missing, but that today is only a design of time, so I have to wait long years.

I step back in time and the only thing left for me to say is that brave people.

For the next few years I hope to walk through the strait, and see what stories or words I can describe for you.

For those who want to know more about the place, visit the Museum of Prehistoric and Sacred Art in the Tagus Valley in Mação!

One last photo, this one taken in the summer of 2018. What a beautiful waterfall! The "Chorro" waterfall, near Ribeira do Caratão. Ancient legends say that such waterfall would be connected under water to the "Pego da Moura", located below the hole of Moura between Casas da Ribeira and the bridge of the Castle".