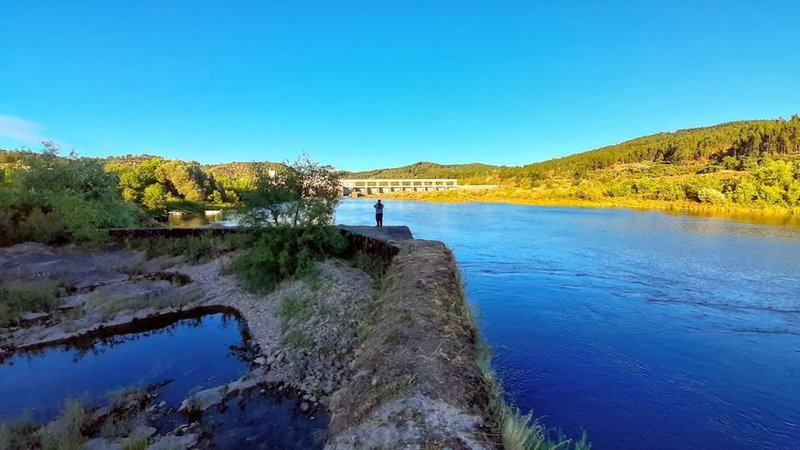 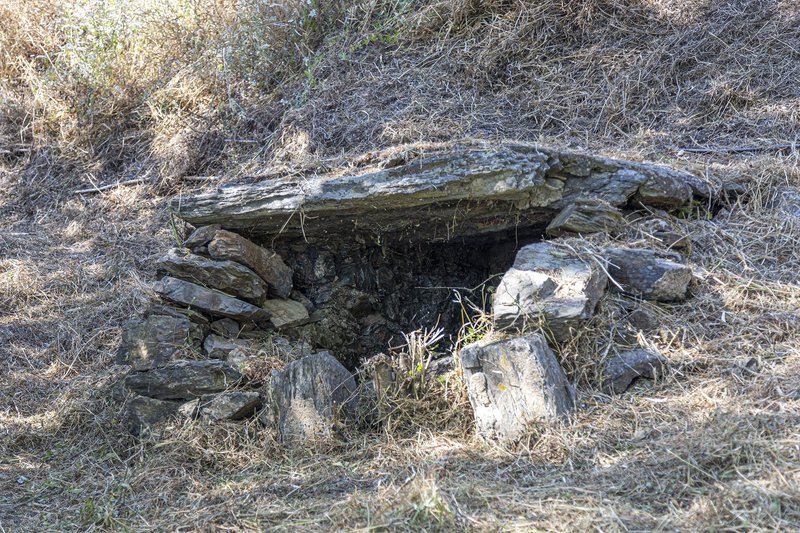 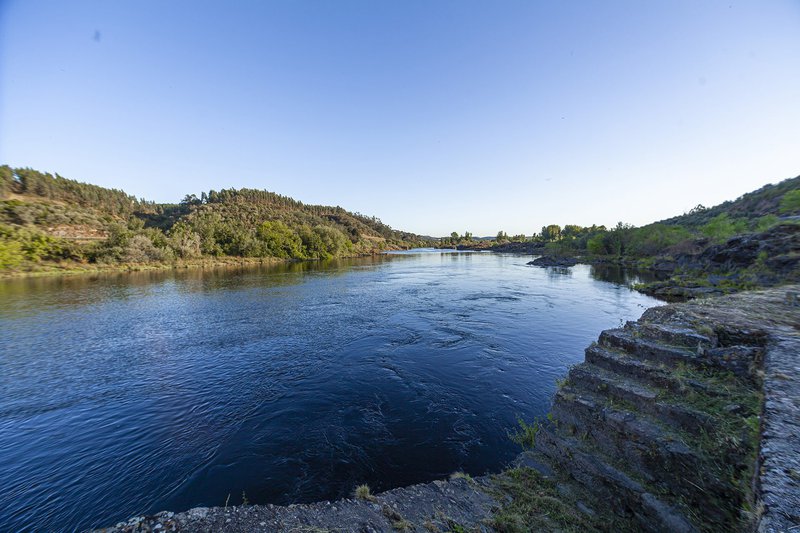 This summary is part of the book CULTURE AND TRADITIONAL FISHING ARTES IN RIO TEJO, EM ORTIGA - MAÇÃO, and its author has authorised this publication.

The entire text has been removed from the original and maintained.

As we have already mentioned, several means are used to catch the fish.

Naturally, the equipment used corresponds technically to the requirements placed by each type of fishing.

Hence, we can even say that the method and equipment used give the name to the fishing gear practiced. We will then discuss some of the most common fishing gear, namely: with rod; with bottle; with rod (equipped with sedan); with trammel net (set and tancha); with round; with nassa and côvão (trap).

Varela fishing knew its great annual period, from the first floods of winter (usually around December) and lasted until June.

In the initial period, the aim was to catch the shad and the lamprey, then the saboga, a period that lasted until June, as we have already written. It was, by the way, very famous and expected the good and fat saboga junha.

In addition to fishing, it can also be practiced by setting up a rope in picket boats or in natural nooks and crannies which, due to the small peninsulas on the shore, have the same current and backwater conditions as those obtained artificially from fishing, as we have described above.

Therefore, to fish with a rod it is necessary to have available: the rod itself, the appropriate net to equip it, a fishing boat with all the necessary structural elements, possibly a picareto boat to replace the fishing or even a river space that offers favourable natural conditions.

"The varela is fixed to the fishing net by three or more ropes called "vergueiras" (hoses) and by the control rope, in order to allow the axis movement, to put the varela to fish - in the river water - and to lift it to catch the fish from the net - out of water. (…)

(...) The net is boiled on the rods by the folds - wider and reinforced mesh in which the mouth of the net ends -, by the rods and control, with the single rope - special weave for this purpose.

Once the net is cooked, the rod is rigged in the fishing area by tying it by the hoses and control rope, giving it, above all, the necessary clearance for its convenient handling and safety, taking into account the opening of the coat, the strength of the back chain, the height of the water, the bubbling, the winds, etc.

The goalkeeper should also be applied - diagonal string tied to the pole about 0.20 m from the control and to the lower one about 0.50 m from the control, to avoid the escape of the fish of fast and quick movements, by the part of the net that comes out of the water last.

pouta (stone), to the bow and stern according to the direction of the same".

Other authors (Ferraria Moreira, F.M.; Seixas, S.I. & Dias, S.M., s.d.) who have studied the fishing gear in the river Tejo, in the wake of Baldaque da Silva, refer to fishing with varela in a less detailed way, but even so, in a very interesting empirical description about its practice and the way it technically works. They emphasize the singularity of being an art that they have only found in Ortiga and give testimony of that by writing the following:

"An art only found in Ortiga was the varela: it consists of a net sack embedded in a wooden arch in a semieliptic way. From the bottom of this bag there is a handle whose end is in the fisherman's hand. When the fish enters the bag, when they touch the bottom of the bag, the handle is stretched and the fisherman feels. He then pulls the net out of the water and removes the fish that are caught in it (BALDAQUE DA SILVA, 1891)".

From what we have been told, and because it is a fishing gear perfectly suited to the natural conditions of the area, its practice has been extended upstream to Belver and Amieira do Tejo.

Legal until a few years ago, it was a very used type of fishing because it was possible to practice it, indifferently, from the pickled boats or from the shore taking advantage of the most propitious corners of the river and softer waters.

The use from a picareto boat implied team work.

While one of the fishermen prepared and launched the Tarrafa,

In the places and nooks of the river that had the most suitable, the companion went to the oars. In other words, he carefully prepared the approach to these nooks and crannies of the river, sliding the boat in reverse, pointing more to the right or more to the left, always following the sign of the launcher which usually went astern, in the hole of the rafter or on top of the bed of the boat.

A lot of skill is needed to launch the Tarrafa and, especially, with regard to the harvest and the half-crop ones, a lot of strength, since they are very big and quite heavy. In local terminology, to throw them an individual has to have chest for this.

1.2.3 - FISHING WITH TRASMALHO - launches and companions

Using the picareto boat and the trasmalho, the river was beaten by the companies that carried out a methodical and well-planned execution of fishing actions. Of course, because the river is not of unlimited size, on the contrary, the so-called gauges were created by the fishermen. The benchmarks corresponded, no more and no less, to sectors of the river predefined as the fishing zone of each companion. In this way they sought and managed not to collide with each other in their trammel driving in the most propitious places and areas of the river. That is, in the execution of the launches.

"The stretches were spaces of the Tagus, strategically studied and shared among the fishermen's companions. There were four "mooring sections" (two boats carried by the current - one on each bank of the river - moored the ends of the net): Revessona, Canito, Cano and Morouços. The others were "buoy stretches" (one boat at one end of the net and a large cork buoy at the other, carried by the current): Brando, Barreira, Junceira, Filipa, Salgueiros, Craveira, Aroeira, Mingalhão, Mansinha, Comboio and Castanho. These were daytime tasks, when the waters of the Tagus were muddy. But they were night tasks (the fish also have eyes...), when the waters of the Tagus were clear.

There were many companions (all made up of relatives) of professional fishermen in Ortiga:

- Manuel Vermelho and his children (Who doesn't remember the last of these "Mohicans" - Simon?...);

- Raul Alexandre - the Solapa - and son.

- João Abelho and his son Manuel - the Siboque - father of the preacher "Evaristo das Carpas" and the grim Rafael.

Women also often took part in the work. The world of these people was the Tagus. How many of my old friends were not conceived in the coziness of the bed of these typical fishing boats,

Each companion was formed by two elements that made up the picareto boat crew. One went to the

The other, from the hole of the rake, prepared, launched, coordinated the action of the trammel boat in its movement down the river and gave guidance to the companion who went to the oars, in order to hit the position and speed of the boat with the position and movements of the trasmalho.

bag shape like that of a pole, which is mounted on a pole

- the round stick - installed in the aft of the boat, pointing towards the sea side, with a variable length of 8,00m, 10,00m or 12,00m originating a net mouth much larger than that of a varela.

When fishing with the roundfish, the backwater current is used, placing the boat in a position perpendicular to the fishing, in the thread of the last step touched by the water, in the style of the varela, but occupying a fishing space more wide than this one.

From any place on the shore or fishing that offered good fishing was very common and for the almost universal Ortiguese community, the taste and practice of fishing with cane, especially when it was the saboga season.

Also in this type of fishing, the fish caught functioned as a complement in the context of the family economy.

Until not many decades ago, with a long and resistant rod, cut in a

any cane field of the village streams, equipped with a sedge, which consists of a resistant cotton thread to which two or three coconut palms (nylon) were attached at one end to tie the hook and in which a cork float about 0.13m long, carved by hand and calibrated with lead tape, was placed, in conditions to be moved along the thread. This set of cotton and coconut yarn should have at most the same length as the cane. More recently, the reeds equipped with sediments gave way to carbon sticks and last generation reels, but, as in other times, always obeying the same principle: if the owner of the day, "reed to the back", arrived in a fishing ground and we will look for another fishing place.

The very early beginning of pole fishing by the members of the Ortiguese community also contributed very strongly to this attachment to the issues, experiences and oralities surrounding the river.

The knowledge transmitted, carefully listened to and liked "drunk", in the framework of the connivances created between older and younger, either between grandparents and grandchildren, parents and children or elderly neighbours and children of other neighbours, with the ultimate goal, for example, to go fishing together for the saboga, were, at one time, the day-to-day life of the community and its greatest wealth as a reinforcement of collective identity.

Remolhão fishing was another well-known type of rod fishing. Not so often practised, it aimed to catch eels and consisted precisely in the use of a set of worms strung along a string. A sewing needle was used for this purpose. The necklace of worms was wrapped around itself, in stitches to form a sauce, and it was attached to another thread which was attached to the reed and the length of the reed. When the worm sauce was thrown into the water, when the fisherman felt the movements of the eel(s) trying to eat the worms, he would quickly pull it into the boat or, if he was fishing from the shore, into any container, usually an open umbrella, turned upside down and spiked into the ground, into which the eel would fall, as it came loose from the worms.