degree of difficulty something difficult

Starting and ending in the same place, this circular trail encompasses much of the parish that gives it its name. It is a rural itinerary with several centuries of history and enormous cultural and geological wealth.

The famous Mourão Well, a must-see, especially in the rainy season, is for many the ex-libris of this route, but there is much more to discover, starting from the Serra da Amêndoa and the almost two dozen villages that surround it.

With an area of almost 40 km2, the parish of Amêndoa has a unique biodiversity and an invitation to take a long walk through the ancestral lands of Amíndula.

With the maritime pine dominating much of the natural landscape of this region, along with species such as the eucalyptus and acacias, there are still some cork oaks and arbutus trees, in addition to cistus and shrubs such as heather, carquejas, lentils, and even the unusual "erva-das-se-se-sangrias" with its blue flowers. Depending on the time of year, we can also find several species of bulbs, wild orchids, puteas, and sargasso.

As for the local fauna, the hiker may be surprised by species such as the red fox, the booted eagle, the badger, the wood pigeon, the pandora butterfly and the common blue butterfly, the tree lark, the rock swallow, the wood warbler and, as far as amphibians are concerned, the fire salamander.

With a vast historical and cultural heritage, where you can feel the harmony between the Earth and Man since ancient times, the Almond Route takes the hiker to other times and experiences, some going back to the Iron Age. An example of this is the Castro de São Miguel, whose remains have reached our days and are now priceless heritage.

In this route we must also highlight the bell tower of the Church of Nossa Senhora da Conceição and the Cruise, both in the town of Amêndoa, the chapel of Santo Isidro in Chão de Lopes, the community oven in the village of Monte Fundeiro, the chapel of Martinzes and the impressive water mine in Pé da Serra.

In this territory of multiple Roman roads, we also highlight two admirable viewpoints, one of them Terras de Amindula, duly marked during the trail. 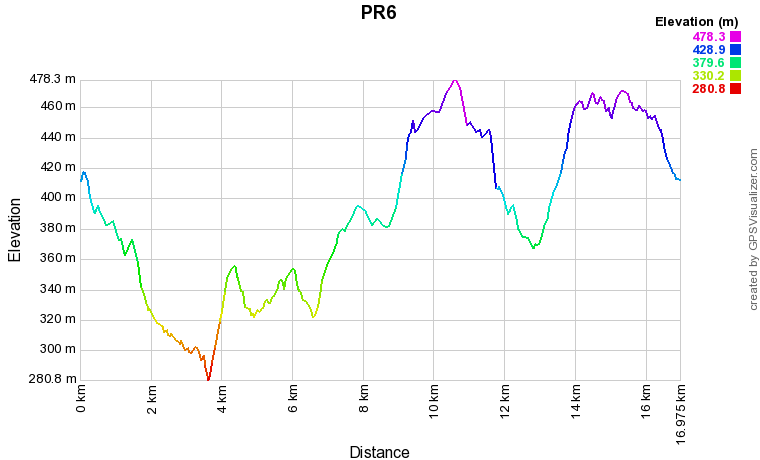