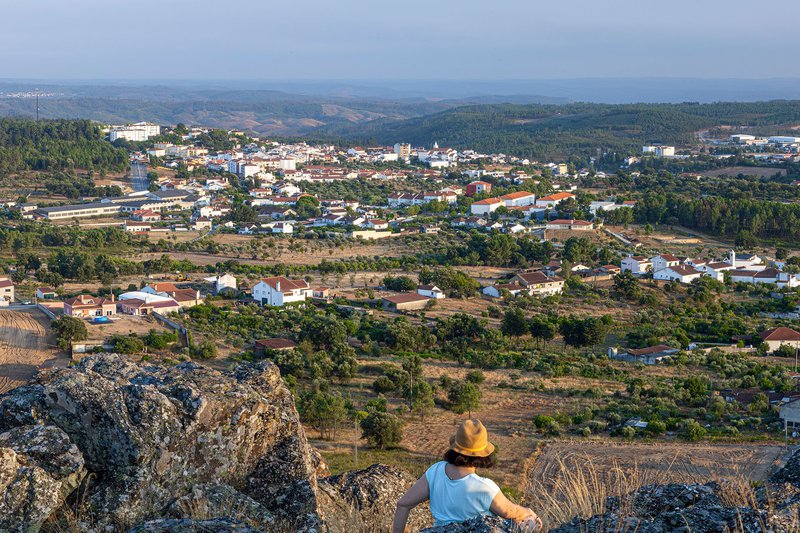 Near the village there are many stones all oval shaped, some already superimposed, like the beginning of the construction of an arch.

According to the legend, those stones were to make a bridge in one night, by the Moors.

In the marked night, fog occurred and when you can build the bridge, it was done immediately during the day. As it was planned to build the bridge that night, they didn't make it. Some of these stones are being sold to pave roads. It is thought that some of those stones were taken from a mine, which existed in that place, from some ore, and, where there is the lagoon, it is said that there is also a cloak, a ram and a lamp, all made of gold.

There was a man who gave alms to a Moor and he told him where the cloak was, but he couldn't tell anyone. Near the place, and when he saw the cloak, he found a friend who sought him out where he was going; the man said he was going to get the golden cloak, but at that moment he stopped seeing it.

2 - Legend of the Midwife

Now, as might be expected, the midwife was very clever and pretending to wash both eyes only one of them. This will lead to the subsequent recognition of the Moor, at a fair, who, feeling recognised, plucks out the eye in question from the midwife with a knife.

3 - Legend of the Bandos and Rebandos

"Between Bandos and rebandos, and the two Caratões both, and Rua da Amieira, and the Aivado rock, there is oiro arraiado, which reaches the plow iron".

This is how the popular legend of Caratão prays, well known throughout the municipality of Mação, in this version, or in the other that says: "Between Bandos and Rebandos, and the two Caratões both, and the Cadouro bridge, there is a gold mineral".

Legend of the 7 Judgments

Legend has it that many, many years ago there lived on the sides of Vedigal, a place close to the Well of Talhas, a discreet Moorish couple. One night, when the Moorish woman went into labor, her husband came to ask the midwife of Queixoperra for help.

The woman came down to the village and went on her way to Cova da Moura, brought the baby to the world and received from the couple an offer for the help provided, being warned to only open the pocket of the apron - where the offer had been deposited - at home.

Unable to contain her curiosity, the woman peered into her pocket on her way back and saw only a handful of coal in it, which, disappointed, she threw away. Already in the village, when she took off her apron, she saw several gold nuggets falling out of her pocket - and at that moment she understood the man's advice: coal had turned into gold!

The midwife then turned back in the hope of recovering the coal thrown away along the way, but found nothing. Even though it was dark night, she still decided to return to Cova da Moura, explain what had happened and regret that she had not followed the orders she had received. The Moorish couple, however, did not accede to the woman's request to compensate her for her foolishness, but granted her, so that from then on she would be more affected, seven judgments. And why seven? No one knows. What everyone knows is that this is the legend that makes the inhabitants of Queixoperra famous for being people with the five bushels well measured.

The Chapel of São Gens is located at the top of the hill, overlooking the valleys that surround the village of Santos, in the parish and municipality of Mação. With each fire, it was never affected.

The reason for this is explained in an old local legend. It is said that there was a hill, full of pine trees and scrubland, which had been attacked by a great fire. The fire consumed all vegetation except the summit. Curious, some people went to the top of the hill to try to understand why this happened.

At the top of the hill they found, on a small slab, the image of S. Gens, believing that, through his intercession, the fire did not consume that part of the hill.

The people, grateful, then led the image of the saint to the Chapel of St. Matthew, where he placed it and from where it would have disappeared the following day. It is said that it was sought everywhere and that it was finally found on the same slab as the day before. St Gens returned to St Matthew's Chapel and disappeared again to be found at the top of the hill.

So that this would never happen again, and understanding that it was the saint's wish to remain on top of that hill, the people then decided to build him a chapel on the very spot where he had been found for the first time. Today he still finds himself venerated by the local people who every year in January follow him in procession to the top. The pilgrimage in honour of S. Gens is famous.

The parish records tell that with the 1755 earthquake the Mother Church of Mação and the foundations of the Chapel of S. Gens were affected, so the date of its construction is uncertain but before 1755.

The myth of the enchanted Moorish, associated to this cave, obeys to a prototype that is common to other regions, especially in the central and northern interior of Portugal.

We are talking about a female genius who lives "enchanted" in a cave where he keeps a treasure. He appears with a seductive look to the passers-by, usually to a shepherd still young, combing himself with a golden comb which allows us to foresee his great treasure. He invites the young man to come back the next day, but without telling anyone, to "disenchant" her, giving her a kiss.

Back the next day, instead of the splendorous woman he finds a snake.

Frightened he refuses to kiss the serpent, thus losing the treasure. Its perenniality is the ultimate goal of the myth.

It is popular belief that these feminine beings, the "Moors", can be transformed into serpents, which is why the cave of the Bando dos Santos is known by two names: Buraca de Serpe and Buraca da Moura.

Monument to the dead in the first great war

The following description of the inauguration of the Monument should be highlighted: "a 21 shot salute announces that Mação is living (...) perhaps the greatest hour of commotion and justice".

"One more shot is heard. The flags go down at half-mast. The two minutes of silence had begun. It seems that everyone remained silent to listen better to the solemn voice of the dead. The voice of the bells ringing in the end. All eyes had tears..."