degree of difficulty something difficult

Framed in the parish of Ortiga, the South Ortiga Route allows contact with agricultural areas, pasture areas and fishing areas. This is, in fact, its greatest wealth.

Developing in a privileged contact with two streams (Boas Eiras, to the south, and Eiras, to the north) and also with the biggest river of the Iberian Peninsula (Tejo, to the south), the South Ortiga Route is, most probably, the richest and most diversified in terms of landscapes, touching, here and there, three distinct regions: Beira-Baixa, Ribatejo and Alentejo.

We are therefore talking about a very rich and diversified route, with breathtaking landscapes provided mainly by the riverside environments of the Tagus Valley. Besides the natural and patrimonial diversity, the walker can delight himself with the remote testimonies of the origin of the Tagus, its millenary relationship with the people who settled here until today and with the perfect symbiosis between the river and the mountain. We lack words to describe the sensation of immersion in the floods and sounds of nature provided by the Tagus.

It is not surprising, therefore, that one can come across one or the other picareto, the iconic boats that once sailed the Tagus and are today a very rich testimony of the cultural heritage of this municipality. It is also possible to come across fishing people and feel the importance of a river that must be protected.

Finally, it is a suitable route for mountain bikers and where it is possible to find several points of drinking water (fountains) available. In terms of accessibility, the town of Ortiga is served by two railway stops (Ortiga and Belver Dam, both on the Beira Baixa line) and the A23 (Ortiga-Mação junction).

Along this route we can observe beautiful riparian ecosystems composed of arboreal species such as ash, alder, black poplar, willow, water-blood and elder, among others. Up the slopes, besides cork oaks and holm-oaks, we can also find trees such as the mastic tree, the cornflower, the aderno-bastardo and the tamagueira. The European orchids and the yellow lily of the mountains, more precisely the bulbous plant iris xiphium - Lusitanian subspecies, both rare in this region, should also be highlighted. The millenary olive trees will not go unnoticed when walking through these fields. The fauna here is very rich; on land, from otters to gineta, and in the air, from the osprey to the bee-eater, from the kingfisher to the kingfisher, the magpie, the porpoise or the rock blowtorch, among other birds, there are many species to discover, just a little attention. In this region you can find five different species of swallow: the tern, the tern, the tern, the rock-rumped swallow and the tern. But there is more: it is not at all impossible to be surprised by the griffon or even by the black stork, by day or, if you walk at night, by the imposing eagle owl, the discreet wood owl, the Galician owl or the grey and red-necked Nightjar.

Fish like the barbel, the boga, the fataça, are already swimming in the water, which are less easy to spot, unlike the beautiful "aquatic forests" composed of aquatic plants of the genus potamogeton among others, which can be seen at various points.

As far as geodiversity is concerned, several old folds and terraces from the origin of the river Tagus formation can be seen on this route. Of great relevance is the outcrop of rocks that in some points of this route can be around 650 million years old, being probably the oldest of the whole Mação County, integrated in the Ossa Morena Zone. Don't miss also the beautiful meanders in the Ribeira de Boas Eiras near Poço do Pombal.

This route is very rich in heritage, from Prehistory to the Modern Age. The ruins of the Vale de Junco resort can be seen here, which testify to the intense exploitation of this territory in Roman times associated not only with the agricultural exploitation of the Tagus Valley but also with the wealth of ore exploitation in the Mação mountains. In the Ribeira de Boas Eiras, located in the area known as Poço do Pombal, lies the old Moinho do Lercas, a place where wheat, corn or rye grains are processed into flour, with a horizontal wheel. Next to the mill you can also look for the Mina do Ti Antero, a wise use of the people of a geological phenomenon to have water.

It is also on this route that you can discover the Anta da Foz do Rio frio, other emblematic places of the prehistoric occupation of this municipality. With a large chamber and a paved corridor with slabs, this monument will have been built about 6,000 years ago, having been reused at least until about 4,000 years ago.

In the South Ortiga Route we also highlight the famous and secular fishing of Ortiga, constructions aiming at fishing with a seat on the bank of the river Tejo. Without hindering the movement of the boats in the river, these developments aimed to create conditions, in the river's water vein, that would promote the formation of a water current contrary to the central vein in order to attract the fish species that in their natural cliff process, aiming to reach the noble areas of spawning, tried to avoid the strong current of the central vein of the river and finding there a gentle and favorable current soon took advantage of it. It is worth mentioning by way of curiosity that on the right bank of the Tagus River, from the mouth of the Rio Frio to the Belver Dam, despite its different states of conservation, we still identify 22 fishing grounds today. 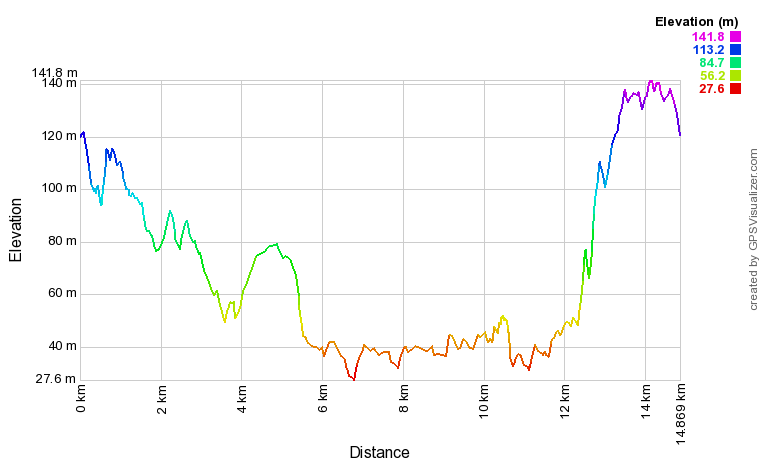